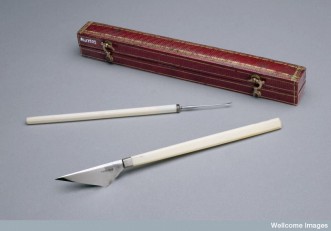 From the titbits I’d heard about Wilkie Collins’ Poor Miss Finch (1872), I had pretty high expectations. The promise of a plotline involving a gutsy blind heroine who refuses to be made an object of pity, embroiled in a complex love triangle where one twin pretends to be his brother (all narrated by a Republican-adventuress-turned-music-teacher) was too much to resist.

After a tour de force first hundred pages or so, with a mysterious murder trial shrouding our hero’s past and a chilling scene in which a little girl appears with a message scrawled in blood on the back of her pinafore, I’m sad to say it all went a bit downhill.

Despite being littered with all of the above, the eventual storyline was oddly bereft of sensation. Having just rushed through the thrillathon that is Armadale, this Collins left me feeling a little cold. Nonetheless, there was more than enough to whet the appetite of anyone with even a passing interest in nineteenth-century medicine. Despite the fact Collins dubbed it A Domestic Story in the subtitle, The Saturday Review considered Poor Miss Finch primarily “a surgical and a medical novel”.

Firstly, there’s the inclusion of the sometime comedic/ sometime creepy oculist Herr Grosse, who gives a (temporary) cure to our heroine, Lucilla Finch. Grosse is curiously pitched somewhere between the ludicrous (his Fosco-like appetite), the Gothic (chiefly the end of Part One where he’s depicted with his “open instrument case before him; his wild black eyes gloating over a hideous array of scissors, probes and knives”) and the more mundane. Particularly interesting is the way in which he suffers that age-old dilemma of the doctor, oscillating over whether to intervene in his patient’s private life and eventually realising that domestic troubles invariably affect recovery and rehabilitation.

We’re also treated to vivid descriptions of what it might be like for a woman – blind almost from birth – to regain her sight, to try and learn how to discern distance and shapes, and the frustrations and disappointments that come with her experiences. Many have noted Collins’ painstaking research into the subject and his  progressive recognition that disability is in the eye of the beholder (*very unintentional pun). Powerfully, Lucilla does not bemoan her blindness – only the way others interpret it. “You will persist in thinking that my happiness depends on my sight,” she rails at the end, insisting “I look back with horror at what I suffered when I had my sight”.  Furthermore, her construction as both sexual subject and sexualised object – discussed by Martha Stoddard Holmes – is all the more striking when one considers a contemporary reviewer’s insistence that “an infirmity like blindness should chill the passions”.

While Lucilla’s characterisation naturally occupies scholars, the portrayal of her betrothed – Oscar Dubourg – also demands our attention for his equally non- ‘normative’ body.  After being violently attacked by thieves in the early section of the novel, Oscar develops epilepsy, and suffers frequent fits which are vividly rendered on the page. Driven desperate by these attacks, Oscar turns to some rather experimental medicine: nitrate of silver. As side effects go, this is worse than your usual headache/dizziness/dodgy tum. Because Oscar turns blue.  Yup, his skin turns a blackish-blue hue, which would probably be terrifying enough for him without the fact his beloved has a particular aversion to dark colours. (Which she claims she can sense, even if she cannot see.)

The moment I was confronted with this curious cerulean side effect , I took to the web to find out whether this was simply an elaborate plot device. But no, nitrate of silver really was a nineteenth-century treatment for epilepsy and really did induce that side effect. (Indeed, silver nitrate is still used to treat warts and verucas, and NHS guidelines still warn of a possible staining of the skin.)

Silver nitrate was still being employed to treat epilepsy in the 1850s when Poor Miss Finch is set, but there was often disinclination to use it, given its well-known side effects. A clinical lecture recorded in the pages of the Lancet in the 1830s already considers it a less “admissible” treatment, noting it is “apt to change the colour of the skin”, and warning of the “permanency of the dark colour” that is wrought.  By the 1870s (the time of publication), silver nitrate had pretty much been superseded by a safer and more effective alternative (potassium bromide).

Nevertheless, Collins’ interest was presumably piqued by the narrative possibilities of this dramatic side effect.  From the outset, he seems to milk it for all it’s worth, having our narrator (Madame Pratolungo) visibly recoil from Oscar the first time she sees him in his new hue:

“The drug had done its work. I saw her fair cheek laid innocently against the livid blackish blue of his discoloured skin. Heavens, how cruelly that first embrace marked the contrast between what he had been when I left him, and what he had changed to when I saw him now!”

Much can be said about the racial overtones of the passage, emphasised by the fact Lucilla’s aversion to dark things includes not only clothes, but also people (illustrated by her antipathy towards the “Hindoo gentleman (converted to Christianity)” that she feels at her aunt’s dinner party).

Throughout the novel, we see such Gothic, melodramatic and sensational possibilities of blindness and skin discolouration evoked, set against Collins’ professed aim at realism, his intention to “exhibit[…] blindness as it really is”. Collins’ eventual elision of sensation for more conventional/ conservative closure (hardly rare among his novels) is particularly interesting here. For while nineteenth-century readers may have been stunned by the marriage between the blind Lucilla and the blue Oscar (given anxieties about hereditary blindness and epilepsy), Collins gives them an extremely domesticated ending, with children. In the apparently mundane, lies the radical.

Though Collins flirts with sensationalism, realism and the domestic, one cannot help but concur with Martha Stoddard Holmes’ commentary on the NYU School of Medicine’s Literature, Arts, and Medicine database, which concludes:

“Poor Miss Finch‘s attempts to produce clinical realism, however, are a resounding and entertaining failure, perhaps because Collins’s affinity for the subversive and outrageous is always stronger than his desire for mimesis.”

Given Collins’ utter exploitation of the narrative possibilities of medicine (seemingly at the expensive of realism), it is thus interesting that The Saturday Review found his description of silver nitrate’s side effects so problematic, more suited to “the columns of the Lancet”, than a novel.  Perhaps the contention was not with Collins’ particular portrayal, but with the inclusion of medicine at all. For although the reviewer conceded that Collins “justifies his resort” to such “repulsive materials” by his ingenious use of them, he nevertheless reveals some anxiety towards the placement and treatment of medicine in popular fiction.